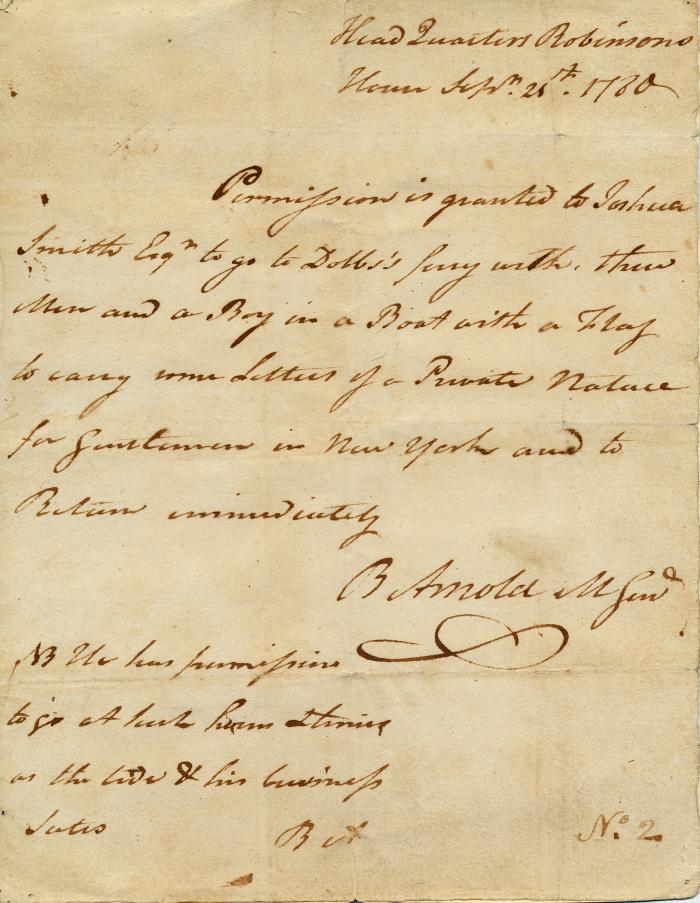 Share
Side one of two of a pass for Joshua Hett Smith to carry private letters for gentlemen in New York. Smith was later charged by American Major General Benedict Arnold to escort British Major John André across American lines. The pass is signed by Arnold.

Benedict Arnold escaped to New York City, eventually commanding British troops in the American Revolution. He died in exile in London, on June 14, 1801.

The pass reads “Permission is granted to Joshua Smith, Esq., to go to Dobbs’s Ferry with three Men and a Boy with a Flag to carry some Letters of a private Nature for Gentlemen in New York, and to Return immediately.

"N.B. – He has permission to go at such hours and times as the tide and his business suits.”

André was hanged as a spy, at Tappan on October 2, 1780.
Identifier
NYSA_A4681-99_Smith_ Pass1
Date Original
September 21 1780
Source
New York State Archives. New York (State). Governor (1777-1795 : Clinton). Papers found on British spy Major Andre ("Andre Papers"), 1780. Series A4681-99, Smith Pass 1.
Rights
This image is provided for education and research purposes. Rights may be reserved. Responsibility for securing permissions to distribute, publish, reproduce or other use rest with the user. For additional information see our Copyright and Use Statement