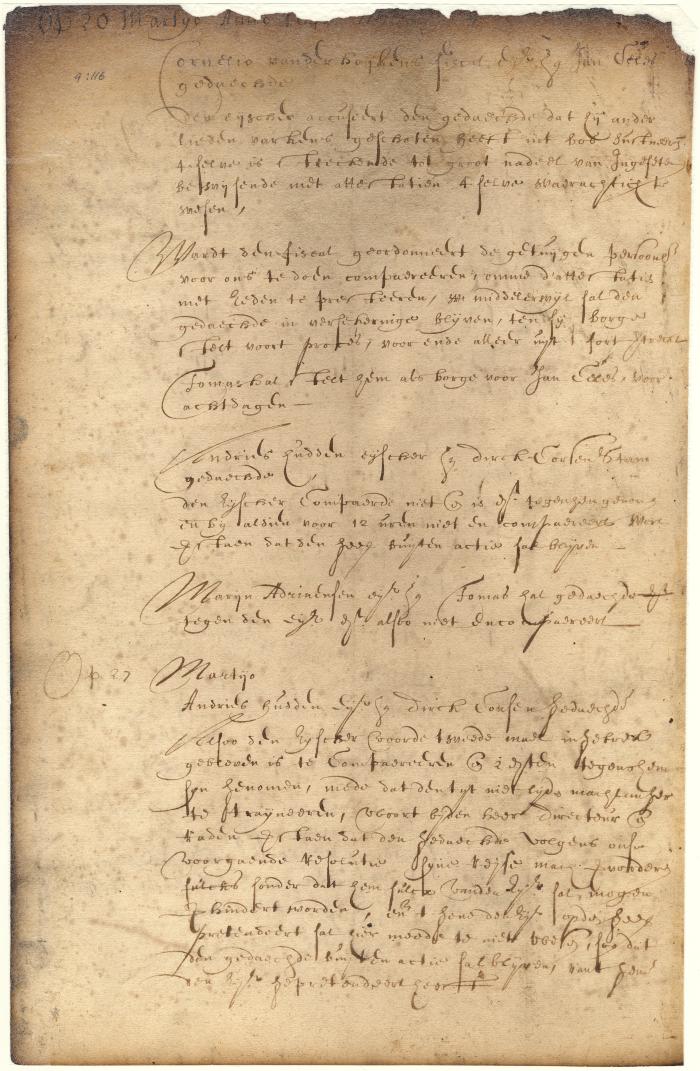 Share
Court proceedings. Balthazar Lourens vs. Jan Tomassen, to oblige defendant to receive a house he purchased ; judgment for plaintiff. Fiscal vs. John Celes, for shooting other people's hogs in the woods ; defendant to find bail or remain in prison until the fiscal completes his proofs ; bail furnished. Andries Hudde vs. Dirck Corsen Stam ; plaintiff being in default is ordered to appear within 12 hours or be nonsuited. [1642]

Court proceedings. Andries Hudde vs. Dirck Corsen Stam ; plaintiff again in default ; judgment for defendant, who is authorized to proceed on his voyage to Virginia. Fiscal vs. John Celes ; defendant acknowledges having shot one hog that was not his ; case continued. Fiscal vs. Hendrick Jansen, late gunner, &c., for being insolent to that officer ; defendant condemned to serve the company one month ; to pay a fine of 10 guilders, with costs, Fiscal vs. Philip Geraerdy, a soldier, for having been absent from the guard without leave ; sentence, to ride the Wooden horse during parade, with a pitcher in one hand and a drawn sword in the other. Abraham Rycken vs. Jacques Bentyn, slander. Maryn Adriaensen vs. Thomas Hall, respecting the delivery of a plantation sold by the plaintiff to the defendant ; settled. [1642]
Transcript / Translation
Identifier
NYSA_A1809-78_V04_p116
Date Original
March 20 – 27 1642
Language
Dutch
Source
New York State Archives. New York (Colony). Council. Dutch colonial council minutes, 1638-1665. Series A1809-78. Volume 4, page 116.
Special Project
Mutual Cultural Heritage Project