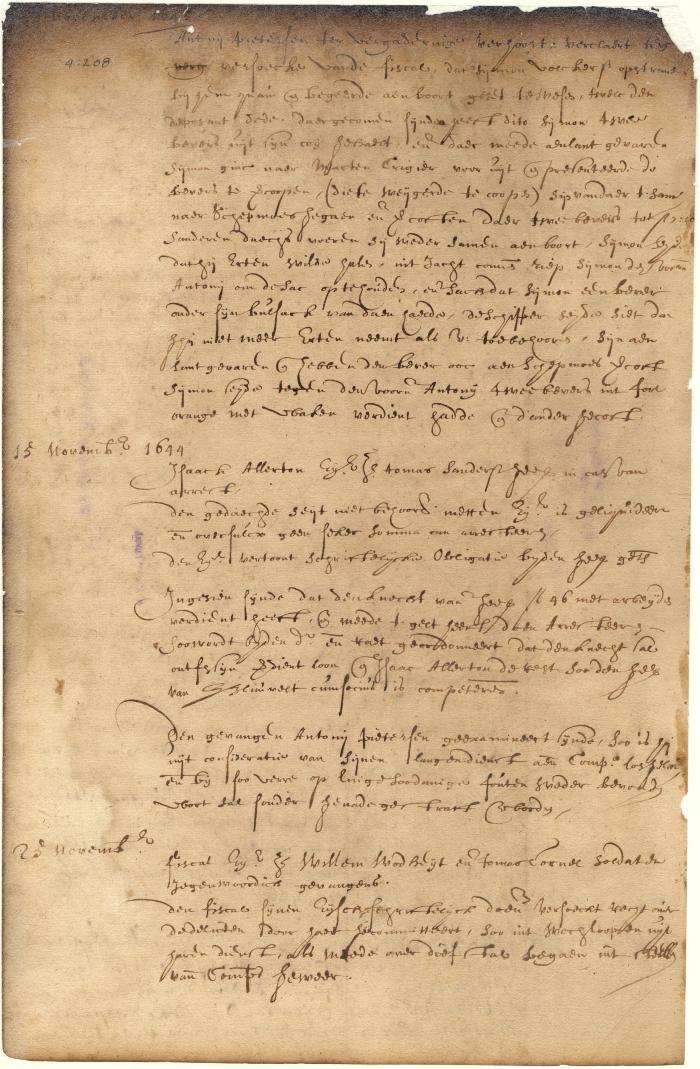 Share
Court proceedings. Isaac Allerton vs. Thomas Sandersen, case of attachment ; defendant claims that as he has had no settlement with the plaintiff, the attachment was invalid ; plaintiff exhibits a note of hand of defendant ; the attachment having been sued out by defendant's servant, on a claim for wages, judgment is rendered for him and plaintiff. In the matter of Anthony Pietersen, as accessory to the theft committed by Simon Volkertsen, the prisoner is pardoned in consideration of his long services, and warned not to repeat the offense. [1644]

Court proceedings. Fiscal vs. William Wodheyt, from Yorkshire, and Thomas Cornel, from Hertfordshire, soldiers, on a charge of desertion and theft ; the former pleads guilty to both charges, the latter to desertion only ; sentence, Wodheyt to be conveyed to the place of execution and shot to death, Cornel to be conveyed to the same place, and there fastened to a stake, and a ball fired over his head, as an example to other evil doers. Hans Kierstede vs. Hendrick Jansen, action for moneys attached ; judgment for plaintiff ; ordered that the moneys be deposited in court. [1644]
Transcript / Translation
Identifier
NYSA_A1809-78_V04_p208
Date Original
November 15 – 25 1644
Language
Dutch
Source
New York State Archives. New York (Colony). Council. Dutch colonial council minutes, 1638-1665. Series A1809-78. Volume 4, page 208.
Special Project
Mutual Cultural Heritage Project