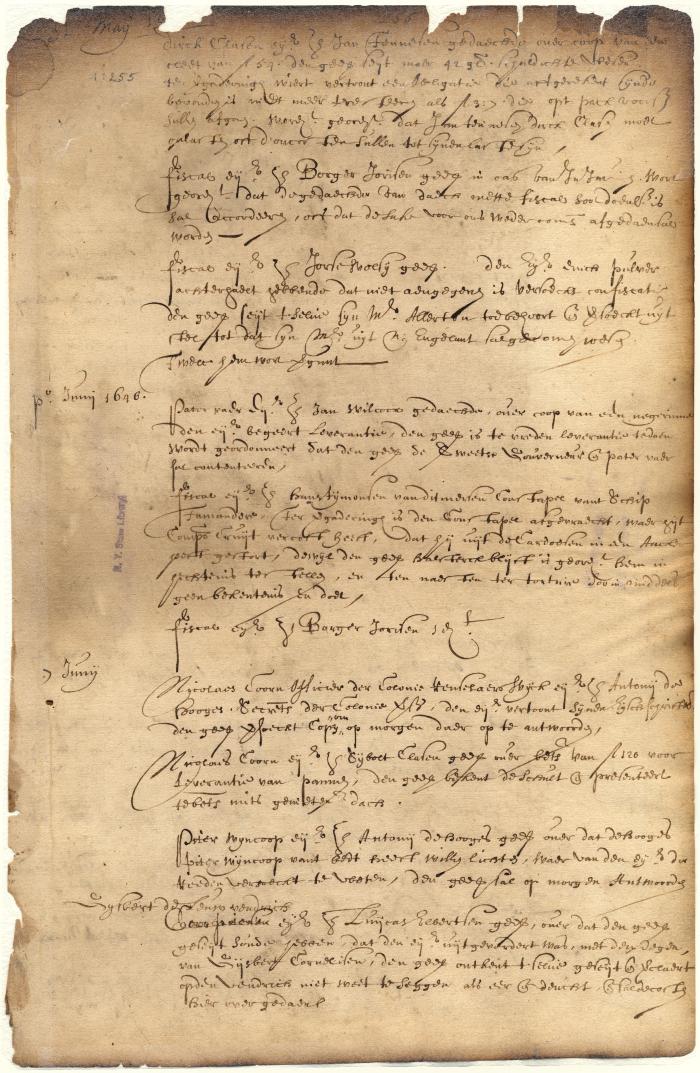 Share
Court proceedings. Hillegond Joris vs. Peter Wynkoop, on an order to show cause why defendant had arrested plaintiff's husband in the colonie (Renselaerswyck) ; defendant says for debt ; the case having originated in Renselaerswyck, must be determined there. Fiscal vs. Borger Jorisen, slander ; case referred. Fiscal vs. George Wolsey ; plaintiff demands the confiscation of powder which was not duly entered ; defendant says it belongs to Mr. Allerton, and requests delay until his master return from New England ; granted. [1646]

Court proceedings. Pater Vaer vs. Jan Wilcox, for purchase of a negro wench, of whom he demands possession ; defendant ordered to satisfy the Swedish governor and plaintiff. Fiscal vs. Hans Tymonsen, gunner of the ship Amandare ; defendant is asked to whom he sold the company's powder, and, remaining obstinate, is ordered to be imprisoned and then subjected to torture if he do not confess. [1646]

Court proceedings. Nicolas Coorn, sheriff of Renselaerswyck vs. Anthony de Hooges, secretary of said colonie ; case postponed. Gysbert de Leuw vs. Lucas Elbertsen, for stating that plaintiff had been challenged by Gysbert Cornelissen to fight a duel with swords ; defendant denies having said so, and declares he knows nothing of plaintiff but what is honest and honorable ; will pay costs. Fiscal vs. Borger Jorisen, slander and threatening to have a piece of the plaintiff's body before he quit the country ; defendant to pay a fine of 60 guilders and to remain in prison until it be paid ; after judgment was pronounced, defendant used threatening language towards the bench, whereupon he was further sentenced to be imprisoned in irons for twenty-four hours after the above fine is paid. Joris Dircksen vs. John (Haes) the cooper, for drawing a knife on plaintiff ; ordered that the fiscal take cognizance of the complaint. [1646]
Transcript / Translation
Identifier
NYSA_A1809-78_V04_p255
Date Original
May 31 – June 7 1646
Language
Dutch
Source
New York State Archives. New York (Colony). Council. Dutch colonial council minutes, 1638-1665. Series A1809-78. Volume 4, page 255.
Special Project
Mutual Cultural Heritage Project