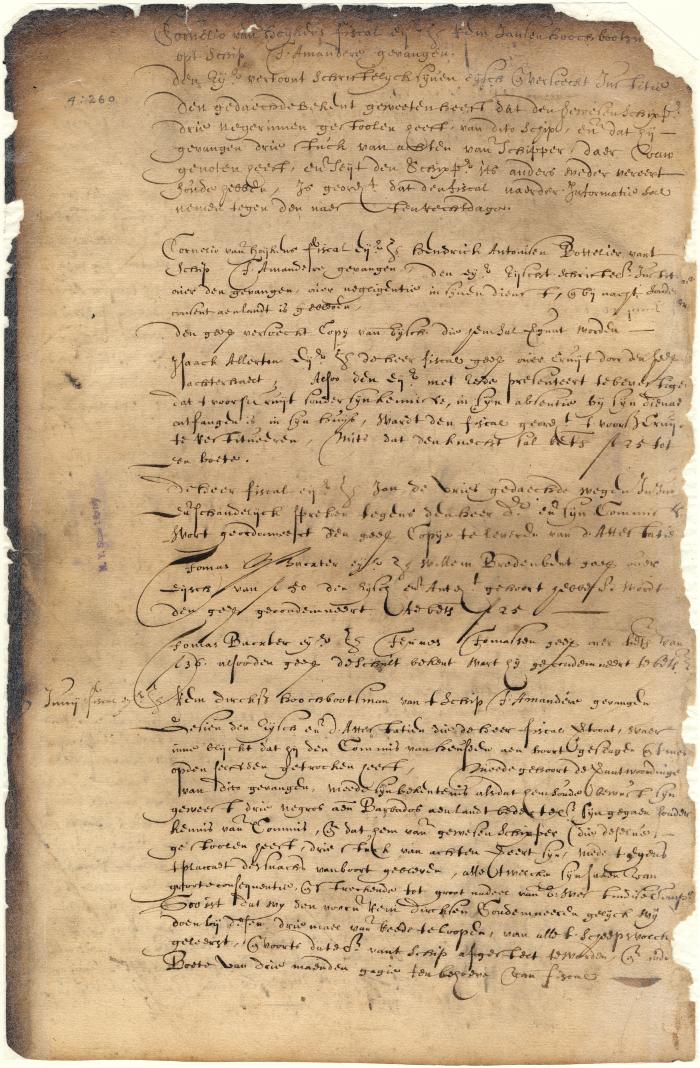 Share
Court proceedings. Fiscal vs. Rem Jansen, chief mate of the ship Amandare ; prisoner acknowledges that the late skipper had stolen three negro women from said ship, and that he (the prisoner) had received three pieces of eight therefrom ; case continued. Isaac Allerton vs. The fiscal, for seizure of powder ; plaintiff testifies that his servant had taken the powder into his house during his absence, without his knowledge; powder ordered to be restored, and the servant (Wolsey) to pay a fine of 25 guilders. Fiscal vs. Jan de Vries, for slandering and calumniating the director-general ; case continued. [1646]

Court proceedings. Fiscal vs. Rem Dircksen (called Jansen, supra), chief mate of the Amandare, for striking and drawing a knife on commissary Van Heusden, aiding in landing negroes surreptitiously at Barbadoes, &c. ; sentence, to jump three times from the yardarm, to be whipped by all the crew, and immediately afterwards turned out of the ship, with loss of three months' wages. Fiscal vs. Hendrick Antonissen, steward of the ship Amandare, for purloining ship's provisions, theft, and smuggling ; sentence, to jump three times from the yard-arm, to be flogged by all the ship's crew, his smuggled sugar to be confiscated, and himself to be turned out of the ship. [1646]
Transcript / Translation
Identifier
NYSA_A1809-78_V04_p260
Date Original
June 14 – 17 1646
Language
Dutch
Source
New York State Archives. New York (Colony). Council. Dutch colonial council minutes, 1638-1665. Series A1809-78. Volume 4, page 260.
Special Project
Mutual Cultural Heritage Project