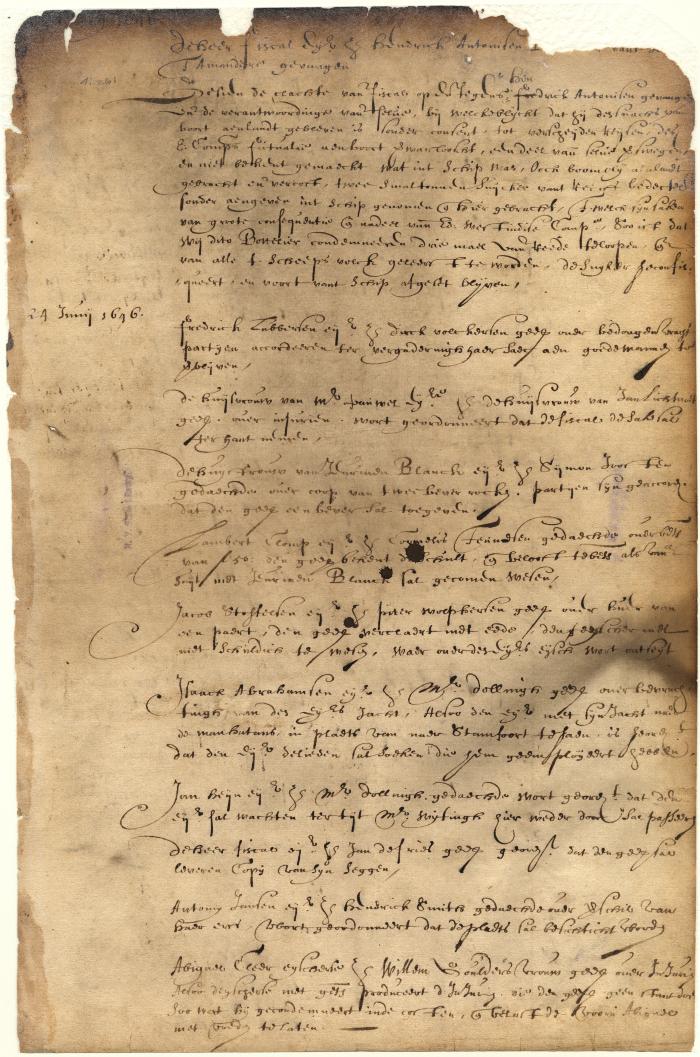 Share
Court proceedings. Fiscal vs. Rem Dircksen (called Jansen, supra), chief mate of the Amandare, for striking and drawing a knife on commissary Van Heusden, aiding in landing negroes surreptitiously at Barbadoes, &c. ; sentence, to jump three times from the yardarm, to be whipped by all the crew, and immediately afterwards turned out of the ship, with loss of three months' wages. Fiscal vs. Hendrick Antonissen, steward of the ship Amandare, for purloining ship's provisions, theft, and smuggling ; sentence, to jump three times from the yard-arm, to be flogged by all the ship's crew, his smuggled sugar to be confiscated, and himself to be turned out of the ship. (cont'd) [1646]

Court proceedings. Pauwel (van der Beeck's) wife vs. John Lightfoot's wife, slander ; referred to the fiscal. Jacob Stoffelsen vs. Peter Wolphertsen (van Couwenhoven), for hire of a horse ; defendant declares upon oath that he is not indebted to the plaintiff, wherefore the suit is dismissed. Isaac Abrahamsen vs. Mr. Dollingh, for freight of a sloop ; plaintiff having come to the Manhattans, instead of going to Stamford, he is referred for his pay to those who employed him. Abigail Cleer vs. William Goulder's wife, slander ; the charge being supported by incontrovertible evidence, judgment is rendered for plaintiff, with costs, and defendant warned to let Abigail alone. [1646]
Transcript / Translation
Identifier
NYSA_A1809-78_V04_p261
Date Original
June 17 – 24 1646
Language
Dutch
Source
New York State Archives. New York (Colony). Council. Dutch colonial council minutes, 1638-1665. Series A1809-78. Volume 4, page 261.
Special Project
Mutual Cultural Heritage Project