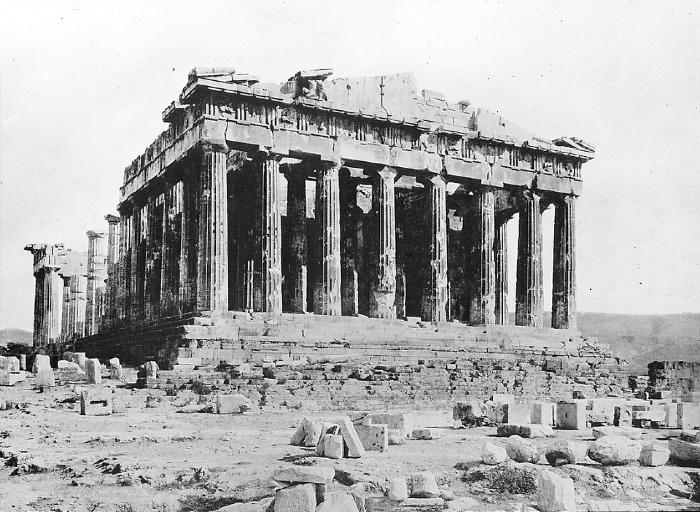 Share
The Parthenon in Athens, Greece, seen from the Northwest. Stray piles of rock and rubble are visible around the Parthenon, which is itself in disrepair. Many stone columns and the front of the structure are still intact, but the roof and much of the rear of the temple are missing. Construction of the Parthenon began in 454 BCE, and work was finally completed in 438 BCE, although additions continued for several more years. The Parthenon was dedicated to the goddess Athena, and built to thank the goddess for delivering Athens from the invading Persians. In 1687, while Greece was under the control of the Ottoman Empire, the Ottomans used it as a storehouse for ammunition. An invading Venetian army hit the Parthenon with a shell, igniting the ammunition and partly destroying the building, leaving the ruins seen in the photograph. See also slides A7521, A7539, and A7522, n.d.
Identifier
NYSA_A3045-78_A7529
Date Original
1922
Language
English
Source
New York State Archives. New York (State). Education Dept. Division of Visual Instruction. Instructional lantern slides, ca. 1856-1939. A3045-78, A7529.
Rights
This image is provided for education and research purposes. Rights may be reserved. Responsibility for securing permissions to distribute, publish, reproduce or other use rest with the user. For additional information see our Copyright and Use Statement