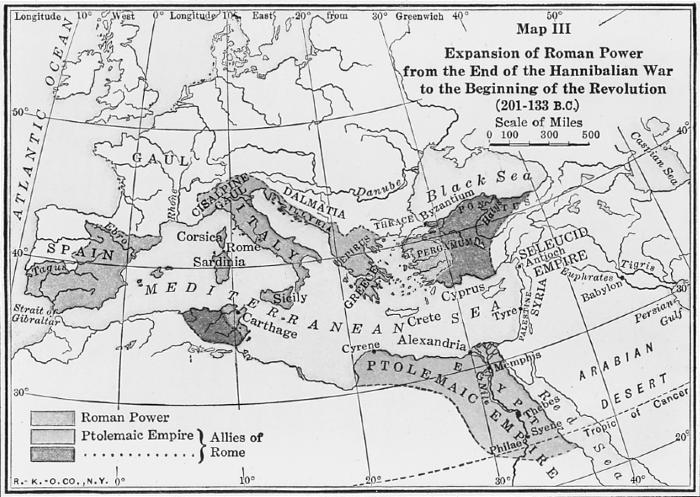 Share
A map showing the “Expansion of Roman Power from the End of the Hannibalian War to the Beginning of the Revolution (B.C. 201-133),” from J.H. Breasted's Survey of the Ancient World. The original picture was taken with the permission of Ginn and Company, the publishers. This map also shows Roman allies such as the Ptolemaic Empire and Pergamum, and rivals, such as Gaul and the Selucid Empire. After the end of the Second Punic War, in which Rome defended itself from an attack by the Carthaginian general Hanibal Barca and vanquished Carthage, Rome was the preeminent power. In 146 BCE, Rome burned the city of Carthage and took control of Carthaginian territories in Spain, Corsica, and North Africa. Rome also expanded eastward, conquering Dalmatia and attacking Macedonia and Greece, n.d.
Identifier
NYSA_A3045-78_A7886
Date Original
1919 – 1939
Contributor
Ginn and Company (publishers)
Language
English
Source
New York State Archives. New York (State). Education Dept. Division of Visual Instruction. Instructional lantern slides, ca. 1856-1939. A7886
Rights
This image is provided for education and research purposes. Rights may be reserved. Responsibility for securing permissions to distribute, publish, reproduce or other use rest with the user. For additional information see our Copyright and Use Statement